This battle is early in the 1814 campaign in Northern Italy. Both armies are trying to "get the jump" on their opponent to try and conduct a swift and conclusive campaign. Never happened, plans and all that! Its Austrians, some not too good, against Junot with a mixed bag of nationalities and abilities!

This was probably the most peculiar game we've played in a long time. Deployment was blind for both sides with defined areas where they could start. Immediately, the lead Austrian Division, on the opposite of the river to the rest of the army decided to attack a French Division in site to its right flank 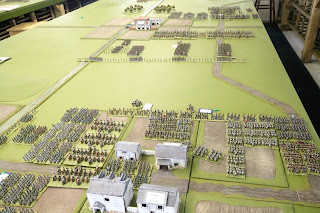 This is the above attack. The only problem is that another French Division arrives immediately to its left flank, or now rear. This Austrian Division now has to escape and it takes time, hampered by poor command and control. 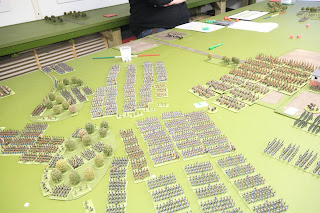 The Austrian Reserves to the rear and central of the main army then decided to attack a French flank Division on their left. When they found they couldn't "fit in" the line, they turned axis and went to support the Austrian Division on the far side of the river. At this point, the Austrians had a left, a sort of centre and no right flank. 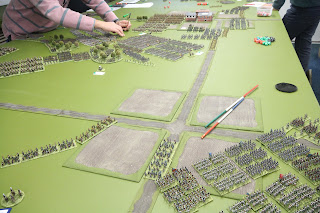 The French exploit the fact there is no Austrian right flank and advance to keep the Austrian frontage compressed. The French Division that arrived on their right has stabilised its position and has fixed the Austrian left seen below. 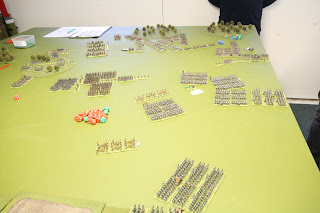 Although the number of troops on this flank, for both sides, were not large, it had the effect of bottling up the Austrians. They had plenty of men, but no place to use them. 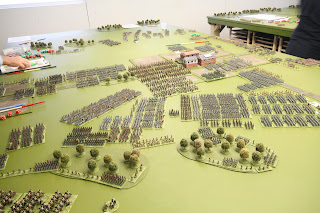 This pic shows virtually the entire Austrian army compressed in a small area. The French are literally herding them into a smaller and smaller space where they have no space to fight effectively. 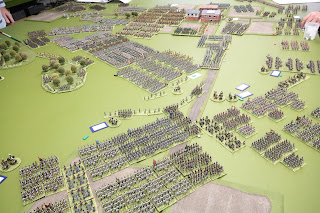 The French left now advances with two full Divisions deployed. The centre is fixed and the French drive in with significant fire support and drive the Austrian back in disarray. 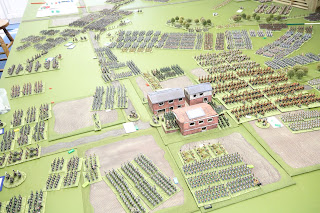 A pic taken from the opposite angle, the French assault is at the top of the pic. Austrian cavalry is now trapped behind the central village, also blocking the manoeuvring of their own infantry. Isolated artillery batteries are also now getting overrun. 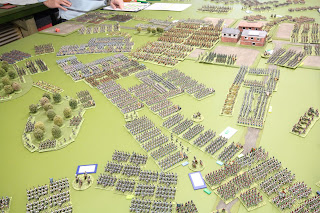 The Austrians are now caving from their right and its is a piecemeal battle. The Austrians are also having problems in issuing orders for formations to retire, to at least create space for a rear guard. We called the game at this point.
The casualties reflect the "oddness" of the battle. Artillery on both sides suffered badly, a lot of counter-battery at effective range! After that losses are really light, it would be prisoners that would have shown how badly the Austrians became trapped. 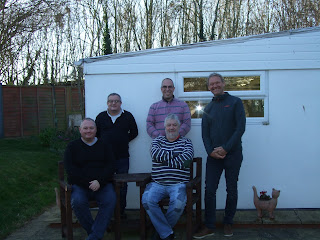 Rogue's gallery again. A good time was had by all. The next game will be Napoleonic, back to the Peninsular with a refight of Vimeiro over a possible 3-4 days. It will allow us either to fight it twice or fight a complete battle including any covered withdrawal.

This battle pitched Marshal MacDonald against Blucher. It was also fought in foul weather, rain occurring a lot of the time with affects on movement, musketry and artillery fire. The armies are reasonably matched and we use some form of variable morale reflecting the troops of the year and theatre. This is from the initial action on the French left. Some time was spent with forces of both sides taking time to get to grips, but the ebb and flow of battle was soon to be upon everyone. The above village changed hands at least three times. 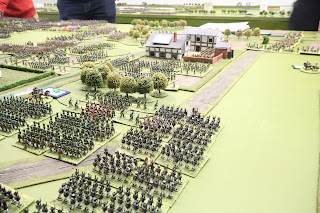 Further in the centre, the French advance to secure the actual river line to facilitate movement between areas as the river bisects the battlefield in two. The village here was held by the allies throughout the battle. 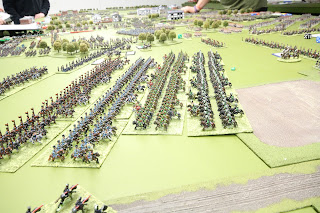 The first cavalry clash on the French left. It was a fairly bloody affair with the French receiving high casualties, but not broken. Back to the infantry slog. 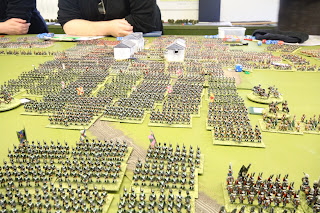 Remaining on the French left, each side commits two Divisions of infantry to the village combat. The French would win this combat decisively, but trying to make progress further into enemy lines was to prove disastrous. 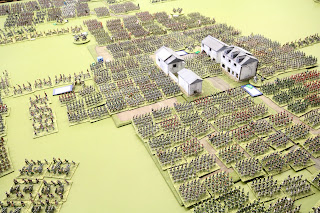 Another view of the same action. I've now also changed the camera mount to get longer shots. 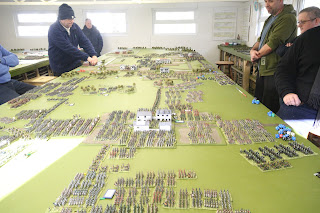 A long shot along the battlefield. The French are on the right of the picture. It seems to give a better "feel" for the action along the whole front. 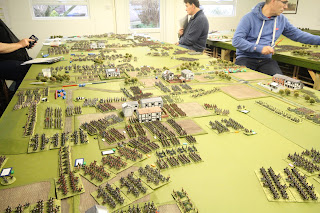 This is the same idea, a long shot taken from the other end of the battlefield with the Allies on the right hand side. 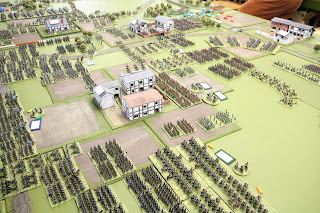 The battle still rages unabated on the French left. The Allies are assaulting again. To put things in more context, we must have played about 35 turns. Most of that was fought in some type of "rain" mostly light but sometimes heavy. 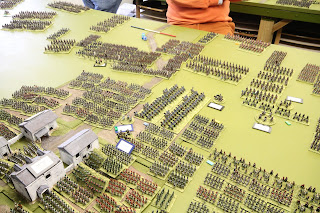 Disaster befalls the French. In the centre of the pic is a Prussian Dragoon Regt (I think) that has broken a French column, then rallied and will charge along the flank of the French front. Its a race to see if the French Generals can extricate their Divisions with order changes! They succeed, but not before some horrible losses.

As with all previous battles, any losses at 30% or higher mean that the formation is combat ineffective. Losses of 40% or higher really mean the formation is wrecked. When we called the battle, the Allies still held their front line and were pressuring both French flanks. The French army would retire, there would be no Allied pursuit. 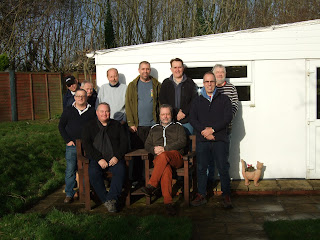 Here we have the "rogues" gallery. 10 players for a week of gaming, including the bottle of Port. A very civilised time was had by all. Next battle, a surprise new one staying with the Napoleonic theme.
Posted by Ged Elliott at 14:31 3 comments:

Ged Elliott
I'm now a young 63 year old who wargames everyday thanks to my better other half (she is indeed the pretty one in the piccy) who goes out and does the real work and my son who has helped me with the "software" bits. I now do "my own thing" in 10mm in a more Grandiose way "In the Grandest Manner" in a new building called the "Situation Room".